I tried to stop reading this book.

LN Bey is so fucking talented that every word pulled me along to every other word.

When you come across a book like this, one that twists you in knots and won’t let go, if you’re like me, you decide you MUST tell someone how you feel.

So I emailed the author. Here’s an excerpt of my email:

I almost gave up after the initial party at her house. Pain and humiliation without pleasure, and Doms who don’t care if a sub enjoys him- or herself, these do not light my fire. She’s fallen in with a group of sadistic ass hats, and they don’t care if she’s masochistic enough to take it. Plus, there are issues of consent. Janet has given her consent, but it becomes clear that she has either been duped, misled, or given insufficient information to make an informed decision. It aligns more closely with abuse or hazing, since she desperately wants to be part of their “secret club.”

But I kept going, because, the writing. You have a gift.

(There was lots more, but you get the gist.)

Bey wrote back with empathy and understanding, sharing insights and a glimpse into the depth of a talented writer who poured years of thought and passion and research into the book, who chose not to treat this subject matter as a lark, who explored the complexity of sadism and masochism.

Thus fortified, I continued onward. Thank goodness I did.

King Solomon’s Mines, this book is a treasure.

Blue is an incredibly well-told story of people with banal names like Pam, Ken, and Jon; with banal careers like caterer, computer programmer and insurance salesman; with private preferences for pain and humiliation in shocking contrast with the banality of their public lives.

Her realtor tells Janet, our submissive housewife, “The outside still fits in. But this interior décor is a little…radical, for what most people want around here.” He’s talking about her house, of course, but Janet mentally comments, “Story of my life.”

In Janet, Bey has created a submissive who gets the irony that what she’s experiencing in real life cannot, will never, match the books she’s read.

We the readers are treated to the delicious irony that a writer of erotica has written a fictional account of a character who realizes that real life cannot match fiction.

Janet, our submissive divorcee, grew into her needs in ways subtle and sublime. Once I finished reading, I started over and re-read the first 100 pages. I wanted to look again at the initial encounter between Janet and the sadistic ass hats. She had a safeword. She didn’t use it until the scene far exceeded her threshhold, but none of the Doms had a clue. That’s the purpose of the safeword – use it if you’re done.

Importantly, none of the people she met were her perfect counterpart, the master to her yearning slave. They weren’t perfect, full stop.

Everyone else is out to satisfy themselves.

If our submissive housewife gets her rocks off, or doesn’t, either way is a big whatevs.

This book discusses important elements of control – who has it, who cedes it, who has responsibility for governing it.

Subs have no control. It is something reinforced over and over. And yet. Yet! Two submissives (Janet and Ken) are our narrators. They control our understanding of the dynamics, they control how much information is shared with the reader.

Oh, sure the author is really in charge, but go with me on the analogy.

A central facet of the story is what happens when the master loses control. Carolyn, the bane of Janet’s newly submissive existence, seems to be devolving, growing more violent, more abusive, unable to control herself or determine when enough is enough. Ken is her slave, and he’s the primary beneficiary (or victim, rather).

Whose responsibility is it to intercede, to stop the abuse? Both our narrators are forced to realize that they cannot simply abdicate responsibility. They are faced with the realization that they have power, when they choose to exercise it.

Janet and Ken are smart and analytical. They parse each moment for its meaning. For example, in a scene where Janet has shown up at a hotel room for a scene with Jon and Dmitri, she ponders the reasons she was made to wear a gag:

“Being so obviously gagged, her mouth full and spread so wide open, gave her a surreal feeling. Was it simply a precaution in a public building? Or was it a silencing humiliation – a signal that, as a woman, a naked one at that, she was just tits and ass, to be seen and used, but not heard? There was a small, shameful thrill in that.”

That’s our Janet –shamefully thrilled, trying to deconstruct why the sadists do the things they do. Looking for the deeper meaning.

Then we have Ken.

“When stressed, he liked to make lists, numbered lists. Bulleted lists. Lists of options, lists of components to a philosophy. Lists of lists. Lists of permutations and combinations of other lists. It helped. It brought order to the chaos…Black and white, please. No shades of grey, thank you very much.”

I’m impressed by the artistic mastery of this book. Ken and Janet share their separate experiences with Carolyn on converging timelines. It felt like a wonderful combination of The Curious Case of Benjamin Button and The Lake House (though no one would accuse Carolyn of tenderness).

I’ve barely scratched the surface of this amazing book. I could keep going. I’ve got hundreds of notes in my e-reader, but if I shared them all, it would obviate the need to read the book, and I heartily recommend experiencing this one for yourself. 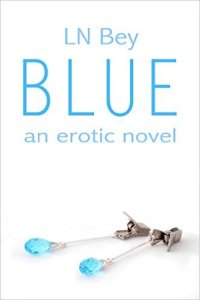 I was provided a review copy of Blue in exchange for an honest review. The book is available for sale on Amazon US and Amazon UK and possibly other e-tailers.

Welcome to the website and blog of erotica author Devi Ansevi. This site contains mature content, suitable for viewers 18+.
Join 706 other followers romance with a twist

Wicked or not... just share your words and images!